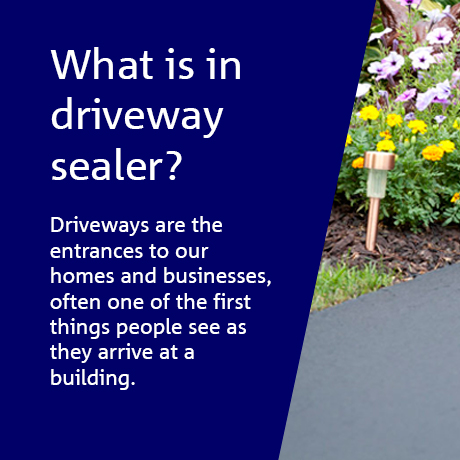 What chemicals are in driveway sealer

Often, one of the first things that people see as they arrive at a building. They play a large part in the aesthetic appeal, and even larger part of the functional use, of a location. Driveway sealers contribute to overall safety — driveways with cracks or holes may pose a hazard to vehicles and pedestrians alike. To this end, many owners choose to protect their asphalt or concrete driveways with sealers. Sealers help protect driveways from forming cracks by protecting the base materials from wear due to exposure to light, temperature variations, and chemicals from automobiles. In turn, this protects the aesthetic appeal and safety of a driveway.

The question is, what is driveway sealer made of that it can accomplish this level of protection?

Several different types of sealers are available for use, each with specific properties that owners must consider before making a selection. The most common types of driveway sealer are listed below.

Please note, depending on the material of a driveway and the conditions in which it operates, owners may select any of the sealers for their driveway based on their preferences.

This type of sealant is entirely synthetic, made of polymers and acrylic. While more expensive than either coal tar or asphalt sealers, acrylic sealers do not have the drawbacks of either and have the added benefit of coming in several colors for aesthetic appeal.

This sealer is asphalt-based, easy to apply, and tends to produce fewer harmful volatile organic compounds than coal tar sealers, making them more environmentally friendly. The drawbacks of this type of sealer, however, are its relatively higher price and its tendency to degrade more quickly than coal tar sealer — the average asphalt-sealed driveway tends to deteriorate to the point of needing replacement after about two years of exposure to the sun, moisture, and automotive chemicals.

Some sealants are blends that contain both coal tar and asphalt. The ratio of products determine the properties and uses of these sealants. A blend with a larger ratio of coal tar will behave more like coal tar sealer and vice versa. The usage of such combinations helps control some of the environmental issues associated with coal tar without seriously compromising its more desirable qualities. The primary difference with such blends is that curing takes longer for blends than for pure asphalt or pure coal tar sealers because particles of tar and asphalt don't coalesce as quickly as pure emulsions.

One of the most common types of sealer, coal tar sealants are made with a combination of coal tar, sand, clay, and additives. Easy to apply and very resistant to the elements, coal tar sealers are highly durable and last well for several years. This sealer is also very affordable and stands up against gasoline and chemical spills, sunlight, and intense weather. The primary drawbacks to this type of sealant, however, include its smell, environmentally harmful runoff, and potential for causing skin irritation.

These sealers are used for smaller cracks in driveways as a way to minimize damage. It comes in many varieties, but crack filler sealer is primarily available in hot-applied or cold-applied versions — the former is applied by heating the material with a torch as it is applied, while the latter can be applied without heat using a caulking gun. Typically, these are temporary fixes until more durable sealers are applied.

Epoxies are significantly more expensive than most other options, but are gaining popularity in use on both garages and driveways. This durable coating helps protect driveways from the elements and reduces the tendency for concrete to crack following dramatic temperature fluctuations.

Linseed oil is one of the earliest concrete sealers available, effective at preserving and protecting concrete driveways without the negative environmental issues associated with ordinary oil-based sealers.

With grease or petroleum as a primary ingredient, oil-based sealers are highly resistant to the elements and last significantly longer than water-based sealers. The drawback is their emission of more volatile organic compounds (VOCs), which can be both an environmental and health hazard.

Water-based sealers are precisely what they sound like — they are primarily made of water-dispersible resins protectants. While this quality makes these sealers more environmentally friendly, they are not as durable as other sealers.

What Is Seal Coat Made Of

Of all the types of sealants listed above, the two most popular are coal tar and asphalt emulsion sealers. While other types of sealants may provide different benefits, these two types are the most cost-effective for larger-scale asphalt driveway projects. While there is some debate as to which is objectively better, professionals agree that these two types of sealers are very different. But what contributes to these differences? For some insight, here is a summary of driveway sealer ingredients for each type and how those ingredients affect the sealer's results.

A Seal Coat is Made Of

After mixing the concentrated coal tar emulsion with water and additives, the slurry is applied to the driveway surface in an even coat. After application, the emulsifying agent destabilizes, and the water evaporates, allowing the particles in the slurry to bond and form a solid film. Coal tar sealants typically take a few hours to dry, but a quality coat can last up to five years due to coal tar's natural resistance to light, heat, and automotive chemicals.

Asphalt-based sealers are asphalt emulsions that primarily consist of asphalt, pure water, and an emulsifying agent.

After mixing in additives and diluting with water, the sealant mixture is applied to a surface in a slurry, allowing the asphalt and any added particles to spread evenly across the surface. At this point, the emulsifying agent destabilizes, allowing the asphalt and additives to bond as the water evaporates. Asphalt emulsions typically take eight hours or more to dry, depending on the water content and weather.

The important performance assets to remember with asphalt are that it is more thermoplastic, yet more susceptible to humidity, compared to coal tar. Due to its chemical composition, asphalt requires higher temperatures to become fluid than coal tar sealers, requiring heat application at temperatures above 50°F. If the temperature drops below this threshold, the asphalt will remain solid and will not form a proper film, resulting in an ineffective seal. Additionally, it should only be applied in dry weather — rain and humidity can prevent the asphalt from forming a consistent film.

Even after application, asphalt-based emulsions tend to be more susceptible to changes in the temperature and weather. This, along with asphalt's natural susceptibility to automotive fluids, means that asphalt should be reapplied every two years.

Asphalt and coal tar emulsions are usually sold in either ready-to-use or concentrate forms. Ready-to-use forms are pre-mixed and have water added to form a thick slurry. Concentrate forms, however, are commonly used in construction applications requiring the addition of water and additives to achieve a final result. Here are some of the additives commonly used in sealant mix design along with the benefits they provide:

Achieving the proper proportion of additives to the sealant concentrate is essential for creating a successful sealant mixture — too much sand or water can make the sealant obsolete, while too little additive can reduce the plasticity of the final seal. Before mixing additives, be sure to refer to the sealant manufacturer's recommendations for mix designs. Why Driveway Sealer is Necessary

The Importance of Driveway Sealer

All of these benefits can help make a driveway look significantly better, increasing the value of the property as a whole. Driveway sealers are relatively inexpensive and can significantly reduce the need for further driveway repair over time, hence making driveway sealers are a very good investment. New coats are applied ever two or three years, starting after your initial asphalt driveway was applied that will keep your driveway in great shape.

Choose Brenntag as Your Sealant Supplier

Brenntag Coatings and Construction Business Group is a leading distributor for top-quality driveway sealer ingredients. Brenntag North America provides a wide range of construction chemicals and additives, including sealants, powder additives, resins, and other driveway sealant ingredients. With unparalleled experience in a variety of industries, we work with the best suppliers to offer raw materials that can supply your next project. You can trust Brenntag to connect you with exactly what you need through our network of over 190 locations.

Contact Brenntag today by filling out the form to the left