Our industry experts are happy to discuss what Brenntag can do for your business.

Get in touch
Our locations

Brenntag is at your service all around the world. Search within your region to find the Brenntag location closest to you. 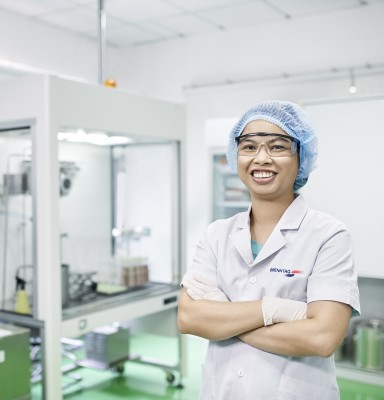 "Working at Brenntag Vietnam as a Senior Lab Technician in the Food Application Center in Ho Chi Minh City, I help to ensure dairy products are accessible to all regions of the country.

Using ingredients from various suppliers, we develop new solutions for our customers’ products. That is our understanding of ConnectingChemistry."

"I feel like a link between the supplier and the customer"

Interview about Phuong's work at Brenntag

Phuong, why did you choose to study food chemistry?

What are your main tasks as senior lab technican?

Last year, I supported our customer developing a formula for drinking yoghurt. I utilized the UHT pilot plant to run it to identify the suitable stabilizer, color, and flavor. Our business with the customer increased thanks to two new ingredients used in the newly created formulation.

The diary market in Vietnam is developing rapidly. What did the installation of Brenntag's UHT pilot plant mean for the industry?

Can you explain how the UHT pilot plant works and what the benefits for the customers are?

The UHT treatment is a technique for reserving liquid food products by exposing them to brief, intense heating, normally to temperatures in the range of 135-140°C. The heat destroys micro-organisms and gives products a long shelf-life of six to eight months without the need to cool the product. This is important as in Vietnam especially when delivering to rural areas the cooling chain is not self-evident. The UHT pilot plant at Brenntag Vietnam is suitable for dairy products such as fresh milk, recombined milk, fermented milk drinks, formulated dairy products as well as other applications such as juice, soy milk, tea and coffee.
The UHT pilot plant is a system that imitates the actual UHT system at the factories. With the UHT pilot plant, we can run small batch size. That is min. 7kg/batch vs. min 10ton/batch of the actual UHT system (depending on factories). Customers can utilize our UHT pilot plant to test formulae and processes with small batch size as soon as they request. This way they save the cost of raw materials, production as well as time. The performance of the products at the pilot plant and the actual plant are almost the same. So, we can exactly evaluate trial samples.